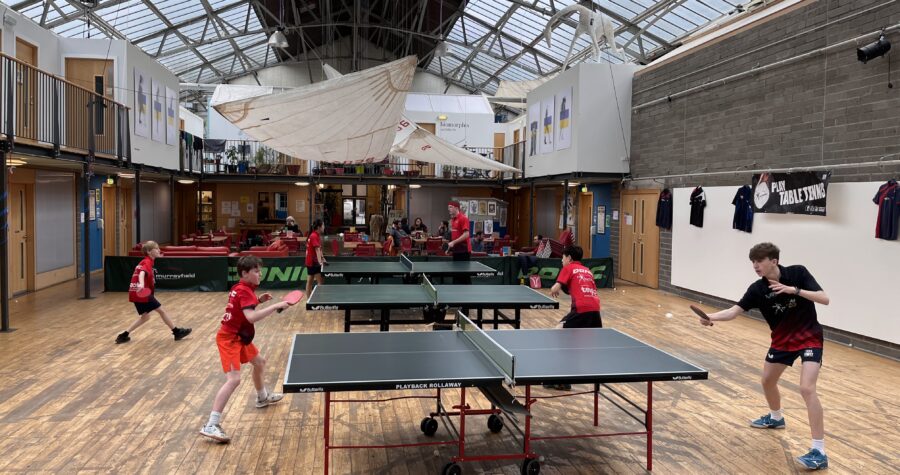 Club President Lindsay Muir hailed a ‘magical night’ as Murrayfield Table Tennis Club celebrated their centenary on the 12th of November. The event took place in Leith, at a packed Out of the Blue Drill Hall. All day the hall was full of chatter and energy. It began at 10am with junior coaching by Leon the Magician for the Murrayfield Academy Juniors. All afternoon, the three tables in the hall hummed with activity with players young and old having a hit.

The main evening event kicked off at around 6.30pm and continued late into the evening. The gathering saw a great blend of the past, present and future of the club as it seeks to build on its proud record of development. Memorabilia and memories mixed with thoughts of the future and how to build on recent momentum and success on the table.

Out of the Blue was a fitting venue for the event. In the 1950s, the Dalmeny Drill Hall (its original title) hosted matches in the women’s division of the Edinburgh and Districts TTL. In 2004 the hall was taken over by the ‘Out of the Blue’, arts and education trust. Alongside its many successful art exhibitions, Out of The Blue has been home of the highly successful social ping pong event, Wiff Waff Wednesday run by Johnny Gailey and others. It successfully demonstrated the inclusive character of the sport, attracting a great mix of ages and backgrounds.

After wine and food, the formal part of the evening involved short talks and performances. Lindsay Muir thanked everyone who had made it along, including several he had not seen for many years. He made a point of emphasising the importance of the club administrators and other ‘stalwarts’ in keeping the club running over the years. As he noted, it’s generally the star players who get media attention and have photographers’ lenses focussed on them. Only during lockdown, when committee meetings were held via Zoom, was a photo finally taken of a MMC committee!

Richard Yule, Chief Operating Officer of Table Tennis Scotland, then took over the microphone. In his comments Yule noted that, in recent decades, Murrayfield had enjoyed leadership from three outstanding figures: Michael MacLaren, Lindsay McCrea and Lindsay Muir (“is there something about the name Lindsay?”).

They had played leading roles in Murrayfield but also within Scottish table tennis more generally. These were the type of outstanding volunteers who ensure the health of the sport. In his comments Richard Yule rightly highlighted the importance of partners, wives and husbands within their sport (“behind every great….”). Lorna Muir was given a lengthy and much merited round of applause for ‘lending’ her husband (and sons) to the sport. In marrying Lindsay she had also married table tennis!

Yule then pointed to the fact that the evening was graced by two gentlemen in their eighties who are still playing. Jack Oughton, a top player in the Northeast of England in his day, and Eddie Still, two of Murrayfield’s trustees. Still is of course Yule’s mentor, who first introduced Richard to the sport in Aberdeen and spotted his potential. Yule reflected that, as very young men, Oughton, Still and Michael MacLaren all took part in the UK-wide Daily Mirror championships of 1953. The competition attracted around 20, 000 entries at what was probably the sport’s peak popularity in the UK. Described in the Daily Mirror as ‘a short, smiling apple-cheeked Highland laddie’, Still was only 18 at the time. He won through the Scottish rounds and later met Oughton, winning 3-0. In the national finals at a packed Royal Albert Hall, he played a 16-year-old Michael MacLaren in the semi-final. Again, Still won (21-15, 21-19, 22-20) as he made it right through to the national final where he lost out to Nottingham’s Billy England.

Still and Oughton are both still playing and demonstrate that table tennis is truly “a sport for life”. The sport had also given Yule, and many present great opportunities to travel the world, playing in international events. Many of those in attendance had played at the highest level, including Terry Forker, Sarah Kenhard (nee Hurry), Pete Lugton and Colin Dalgleish.

The evening featured two short exhibition matches between players hoping to follow in these illustrious footsteps. The juniors and several others were sporting the smart new Centenary shirts, using Pete Lugton’s special club logo. First of all, it was the battle of Charlie McGowan’s spiny loops versus current Scottish champion Faye Leggett’s fast counter attacks.

Later, it was the battle of two of Murrayfield’s Academy players, Nichole Lee and Rory Thomson; two outstanding talents for the future. Despite the pressure of the crowd, the two short matches featured several good rallies and impressive play.

Leon the magician performed some sections of his successful 2022 Edinburgh Fringe show with 2020 Scottish champion Colin Dalgleish and Leandro Golinski among his ‘victims’. He teased the audience for some time before bringing the performance to a great conclusion with his final reveal. Leon also somehow played blindfolded against Faye Leggett. Leon earlier had performed a show for the junior players, as well as walking round performing close up magic throughout the day.

Following that, some of John Yau’s superb table tennis cake was eagerly scoffed. The raffle brought the evening to a close on a high. Thanks to the exuberant and insistent salesmanship of William Wang and William Goh, tickets sold out. Lindsay Muir’s predecessor as Murrayfield President, Bob Sterling, drew the winning tickets. Thanks to all those who contributed prizes including local businesses Magical Floristry and Yamato Japanese Restaurant.

Above all it was a great opportunity to catch up with figures who have helped build the club and look ahead to the second 100 years.  Many thanks to all those involved in making this such a successful event.

Particular thanks to the team at Out of the Blue (name) for their organisational efforts and for assistance on the day, with Abby & Lyndsey leading the way. Thanks also to the Out of the Blue Cafe team for the tasty food and keeping everyone supplied with drinks. Thanks to Johnny Gailey and his Wiff Waff assistants Lindsay & Drew for keeping the tunes flowing. Thanks also to Johnny & Bethany of Out of the Blueprint for their fantastic efforts in designing and printing the history booklet, Murrayfield Memorial Club: The First 100 Years. Near the entrance a memorabilia stand, featuring old photos, historical documents and a range of vintage bats, was set up. This took many of the guests back through the decades.

Thanks also to Terry McLernon OBE (TTS Chairman) and Stewart MacGowan (Honorary President) for coming through for the event. Also to Ewa Well for her fantastic photos of the afternoon session and Lindsay McCrea for his of the evening.

By 10pm, things were winding down and guests started to slowly filter out. As ever, it was Lindsay and ‘team Muir’ who were last to leave, dragging out the final bits of gear out into the chilly night air. The hall, thronged with people minutes earlier, fell silent. Murrayfield’s second century had begun…