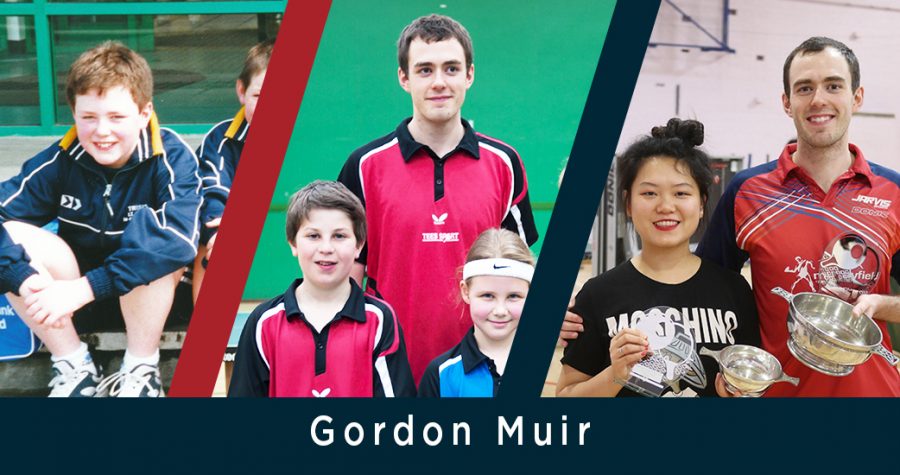 Gordon Muir has been involved in table tennis from an early age. Initially coached by his father Lindsay he has gone on to become a coach himself. From 2015 until Early 2020 he was head coach of Murrayfield Memorial Table Tennis Club, where he coached hundreds of players including John Hannah, Calum Morrison, Faye Leggett, Charlie McGowan & Haydn Jackson. He has acted as an NPC for Scottish teams at several Schools Internationals and is a current member of TTS Selection Committee.

He has also become a successful tournament organiser, introducing the Banded concept into Scottish table tennis in 2015. After taking a break from playing he has recently been part of Murrayfield’s SNL and ELTTL teams. In the 2019-20 season he achieved the rare triple of heading the ELTTL Premier League individual averages, leading Murrayfield I to the league title and picking up the Mike MacLaren Quaich at the Edinburgh Championships. In 2014 he picked up the Kirkwood Trophy for his contribution to Edinburgh & Lothians table tennis as a coach and tournament organiser. He will soon move to China where he hopes to continue to develop his knowledge and experience of the sport.

▸ When and where did you start playing table tennis?
▹ I started playing at Murrayfield Church Hall with my dad when I was about 9.

▸ How often do you train and coach?
▹ I was coaching 5-7 days a week and trying to train about 2-4 times a week depending on other commitments.

▸ What interests you and excites you most about TT?
▹ There are loads of things, but when I spot a new way of playing or coaching. It always inspires me that so much is possible in the sport. I always like to try new ideas with players and keep things interesting for them too.

▸ What do you prefer to do – playing or coaching?
▹ That is a hard question. For me playing is a lot less stressful, it is something I really enjoy. However, coaching is something that I have been lucky enough to call a job for the past 9 years, and the personal connections I have made with people in table tennis are something I will always hold dear. On balance I would probably have to say coaching!

▸ How do you think you have developed as a coach? Who has influenced your coaching?
▹ I think a big influence when starting out was the coaching I received as a teenager at the Grange in Stirlingshire. James Russell used to organise coaches from England to come up once a month or so and I think I picked up a lot of useful stuff at that time that helped me get started. Working with Dave Fairholm at Peebles Hydro on the sports and activity programme there in my early 20s also was a great experience.

I think that the recent reflection while completing my Level 3 coaching course has shown me how much the non-technical side of coaching and the dynamics of how one interacts with a player and the atmosphere they create in the hall.

▸ What have you found most interesting about the Level 3 coaching course?
▹ That it really makes you think about your coaching style and the influence it has on players. I would highly recommend the course although there is quite a bit of work involved.

▸ What are you into apart from table tennis?
▹ I enjoy cycling, cooking, chess and learning new things.

▸ What is your biggest achievement in table tennis so far?
▹ Probably the ELTTL tournaments and ranking system. I am always happy to see how much people appreciate the events and that our ideas have been successful.

▸ Have you picked up any new habits in lockdown?
▹ Does cutting my own hair count!? I suppose learning to write Chinese characters, I am studying almost every day and enjoying the process.

▸ What’s you plan for the future?
▹ I was supposed to start a full-time Mandarin course in Shenzhen, China in February. Currently I can’t enter China, but I am hoping to go and join my girlfriend there as soon as possible. I’m going to miss TT in Scotland, especially the players I coach, but am excited to see what direction Krzysztof takes the club.

Click here to vote for the MTTC Player of the Year ?